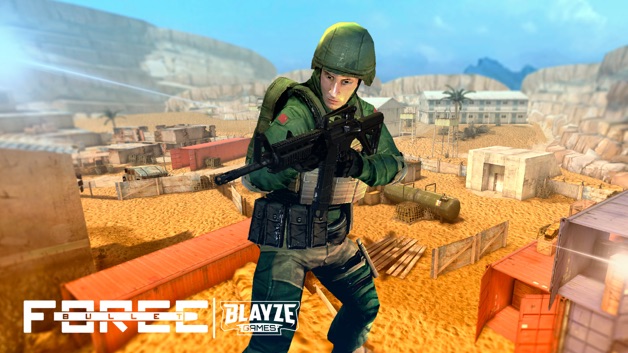 These are the rules of Bullet Force. You must agree to abide by these terms, that you will express good sportsmanship to your fellow warriors on the battlefield, before you are allowed to play the game. Read all of the below rules CAREFULLY and THOROUGHLY. As a Bullet Force player, it is imperative that you are well-informed of the game’s rules and abide by them.

Bullet Force has a zero tolerance policy on hacking in any way. Regardless of the type of hack you use, how much of an advantage it gives you over legitimate players, and how long you have used it, your account will be permanently banned if valid evidence has been found, proving that you hacked on your account.

The use of modded IPA/APK/OBB files to play, due to the hacks that they provide, are also prohibited.

Exploiting map glitches gain an unfair advantage over others

On first offense, glitchers will be temporarily banned for 3 days if you are caught glitching on any spots that make it difficult or impossible to kill said glitcher.

Players who use offensive language aimed against others or use it in excess, for example, every couple sentences/messages or so, will be warned by moderators to stop using offensive language if they are present in-game. Players who disrespect moderators’ authority by continuing to do so will be kicked from the match at the moderator’s discretion. Attempting to bypass the chat filter, unless it is a word deemed non-offensive or not offensive by the vast majority of modern society, that is wrongly blocked by the chat filter, is a punishable offense for kicking and muting. This also applies to the official Blayze Games forum and Discord server.

Anything sexual, racist, or can be considered offensive by anyone will be banned. Usernames condoning any crime will be banned. Names promoting any groups that condone such crimes will be banned. Usernames promoting the use of including but not limited to illegal substances, drugs, tobacco, and smoking shall be banned. A username that insults any person based on gender, race, skin color, religion, ethnicity, name, etc. will be banned. You will have to buy or earn 500 gold and then inform moderators/customer support that have this or a greater amount of gold, and your account will be unbanned, but you must change your username immediately to a non-offensive one. Repeat offenders will be given longer punishments or a permanent ban.

On a case-by-case basis, heavier punishments may be laid out against repeat offenders. Examples of possible punishments can include but are not limited to longer ban/mute times or permanent bans/mutes from the game or in-game chat, respectively.

Examples of what can be considered fraud on the support website include but are not limited to:
– Using edited images as proof of loss of in-game currency
– Uploading the same receipt over and over in multiple support tickets with varying claims, of different amounts of gold/cases, of unreceived gold/items

Any hacked/modded/cloned/permanently-banned accounts will be refused customer support.

Any accounts shared online, with evidence of username and password shared (that is working), whether privately or publicly, will be banned. No exceptions.

By sharing your account with others, even to those you know in person, you risk getting your account modded or have hacks used on it. Any other person using your account to hack or mod it is not a defense against a ban on your account if valid evidence has been found, proving the account was used to hack. Blayze Games shall hold no responsibility in such cases.

Ignorance of the law is not a defense in challenging decisions to ban your account(s) for a legitimate reason in accordance with these rules.

If you have been unjustly banned or muted in-game by a moderator, you may submit a complaint on the Blayze Games forum, on the official Bullet Force Discord server, or on the Blayze Games support website. You can find the respective links to these places in the game’s “Community” section.